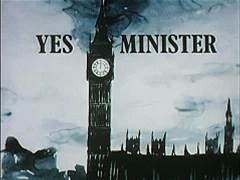 Yes Minister is a humorous British TV episode that was first transmitted by BBC Television in the 80’s. Several episodes were adapted for BBC Radio, and a stage play was produced in 2010. Set principally in the private office of a British Cabinet minister in the fictional Department of Administrative Affairs in Whitehall. Yes Minister follows the ministerial career of a Member of Parliament of his various struggles to formulate and enact legislation or effect changes that are opposed by the British Civil Service, in particular by his Permanent Secretary with his Private Secretary usually caught between the two. The series was a popular success and received a number of awards. It was the preferred television programme of the then Prime Minister of the United Kingdom, Margaret Thatcher.

No Minister would be a fitting title for a similar episode if made in Sri Lanka based on real life experience to highlight ministerial misadventures that occur frequently in our parliament that we see on the electronic media or read in local newspapers. No Minister programme  would help to establish good governance in the country. The said mishaps are unavoidable in an over sized cabinet where ministers share ministries. These ministers when framing proposals and ratify legislation get imprudent advice from non-professional and careless administrators in these ministries. Some example of such proposals include the coal fired Sampur Power Plant, 65,000 Housing Units to be built in North and East Provinces. What is even more embarrassing is that nobody takes responsibilities for this weakness and the show goes on hindering progress towards good governance, which is the need of the day for the country.