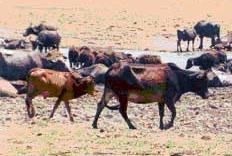 Waiting till the Cows come Home is an old saying and was a common feature in the villages. 60 years ago as kids, in the little village of Moolai in the Northern Peninsula of Jaffna, every morning we took care of the home garden and feeding domestic animals was part of our routine chores; used to be full of life, living together, eating together and caring for each other with everyone sharing the work at home and things were simpler then, it seems. Father who was the local Post Master in the mornings before preparing himself to work would help at the well to draw water to bath, getting us ready for school. While mother gets busy preparing freshly cooked breakfast for the family using our home garden ingredients in the open hearth using fire wood. Each morning, the cowboy from the village will come to take our cows with those from neighborhood for the day to the grazing land at the periphery of our property. Cows like to escape when they can and aren’t too smart and usually just follow their noses to the next patch of green grass. They usually don’t come to their sheds by themselves, one has to go out and bring them back, for if cows did it by themselves, there’d be no need for cowboys. In the evening mother would sit in the verandah with aunts and others from the neighbourhood, who call on her for a gossip, while ‘waiting till the cows come home’. Once the cows are brought home by the cowboy, the ladies gathering will disband for the day and mother will start preparing our dinner, helped by sisters. While the boys help father with all outdoor activities like drawing water for the plants and feeding the animals. Then as the sun sets all wash up and the big kids helped by father get on with school homework under light from kerosene lamps. Thereafter the family would dine together, read the newspapers, listen to the radio news and retire to bed with prayers. Then life was so predictable, but compared to that period, today life is so unpredictable and complex.

The civil war of thirty years has weakened more than a generation of youth particularly in north and east of the Sri Lanka. Today as young adults, they are struggling through a multitude of problems, a legacy of the war. Many particularly those who were at the war fronts were killed during the bloody war, that intensified as the years rolled by until May 2009. The war was brought to an end by the state forces, only made possible with international assistance. Thereafter though the guns were silenced many youths were made missing or held in jails by the state, causing untold miseries to their families. Today of the surviving male and female youth from war front, few managed to get sponsorship and are living overseas as refugees. But many live with shell sprinkles in their body and spinal injuries, while others had returned from the battlefield injured, maimed, or with lost limbs. The “yesterday’s idols” the former youth who were then adored by their people are today handicapped adults facing a grim future. Of whom many got married during the war years and now have dependent families with children. Today they are left dumped in their villages by the state and ignored by the very people for whom they fought the state forces. Paradoxically, the people in particular those who are living overseas benefited by the war fought by the ‘boys’. It further helped to internationalize the ethnic conflict – the root cause was the subjugation melted on them by the state since gaining independence in 1947 from the British.

A significant portion of the war years generations had migrated to escape from both sides involved in the battle to prevent conscripted by one side or detained and possibly tortured to death by the other. Their desperate journeys took them across the seas crossing international borders, seeking refuge and asylum overseas. Many of them have been granted refugee status and have adopted themselves as useful citizens of those countries. But there are still few among them who are discontented and stressed with homesickness. Yet they are unwilling to return home and are indulging in activities not accepted by their adopted countries. On the other hand many privileged section of youth, managed to escape the restrictions imposed by the combatant ‘boys’ to leave the war zones, migrated to greener pastures. They had either accompanied their discontented parents with professional qualifications and experience, or they themselves managed through schooling and graduated locally. These professionals young and old exploited the easy entry facilities of open visa granted by their host countries. Today they all form bulk of the world-wide Tamil diaspora; most of them as adult are doing well in their host countries. Many are married, have families with children and taken up the citizenship of the new country they live in.

Meanwhile youth presently living in North and East born during the war grew up amidst disasters and faced many hardships. There is also the sudden impact of modernization and global culture which they were not exposed to during the war due to blockades and more immediate survival needs. In addition to these handicaps, they also have not had the advantages of a beneficial educational sector to help them make a future for themselves and rebuild their society. Society is just recovering from three decades of devastating civil war. In the current post war context, the future of the community depends on rebuilding broken social structures in which youth can play a crucial role. However, to understand the predicament of today’s youth, it would be necessary to understand their past, current psychosocial context and the educational system. The popular distortion of youth is that they are unemployed and do not seek any constructive recreations but spend their time on consumer pursuits. But in reality the overwhelming majority of youth, males and females, are struggling with their identity and role in society. The younger generations are waiting for a very long time with the war ending in 2009 for something to occur.

It is said generally, adolescence and youth are critical periods of transition where children grow up, mature and develop into adulthood, taking on responsibilities, becoming respectful citizens, marrying and forming families, working and settling down. But there are many factors that are not conducive for many of these youth, as reported earlier posting in Northern Breeze “Every cloud has a silver lining”. It is therefore not surprising to hear the Chairman of Northern Provincial Council who is a veteran administrator say that “Nothing Tangible has been achieved as far as Tamil people are concerned”.

Today our society needs security more than anything and is looking forward to this security from the New Constitution to be drafted by the newly formed Constitutional Council made up of Members of Parliament. The whole country now is literally ‘Waiting till the Cows come Home’ for the Elected Members of Parliament (cowboys) to deliver the New Constitution Chapters (the cows) to secure the nation (home). Our people today are ‘Waiting for Security’, like ‘Waiting for the Cow’ in the good old days.