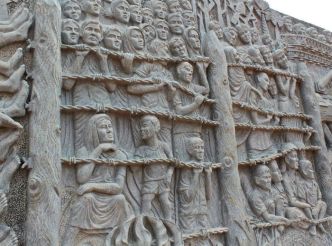 ng end of the civil war in 2009. Mullivaikkal Muttram located in the Thanjavur District of Tamil Nadu State in India is today the only memorial of significance dedicated to the civilians massacred during the final phase of the Civil War at Mullivaikkal in Sri Lanka. With increasing desecration  of the memorials in Sri Lanka after the end of war, it was decided to build a memorial in Tamil Nadu to leave a trace in the pages of history of the bloody civil strife that took the life of many hundred thousand civilians mainly Tamils.

Civilized societies remember the death and in Sri Lanka first such Remembrance Day (known as Poppy Day) falls on 11th day in November Remembrance Day is a memorial day observed from colonial period with other Commonwealth of Nations member states since the end of the First World War to remember the members of their armed forces who have died in the line of duty. It is observed in most countries to recall the end of hostilities of World War I on that date in 1918 that formally ended “at the 11th hour of the 11th day of the 11th month”. When nation join in with the rest of the world to observe two minutes silence to pay respect to those men who sacrificed their lives in the two World Wars to free the world.

The second Remembrance Day is observed to pray for the thousands who lost their lives in the tsunami of 26th December 2004. The 2004 Indian Ocean earthquake triggered a series of devastating tsunamis along the coasts of most landmasses bordering the Indian Ocean, killing 230,000 people in 14 countries that include 36,603 people from Sri Lanka who perished in the months following the tsunami. It was one of the deadliest natural disasters in recorded history. Indonesia was the hardest-hit country, followed by Sri Lanka, India, and Thailand.

In Sri Lanka no matter which faith one follows, traditionally all remember the death of their loved ones. Death is a cyclical reality in all communities, and the yearly death ritual of the Buddhist differs from that of the Hindus, yet both believe the death rites are important not only for the dead but also for the continued welfare of the living. Hindus in particular give annual service in homage to the deceased that is similar to the rites conducted immediately after death. Family members often bring a priest into the home or go to the temple in order to make an offering to both the recently deceased and other close ancestors. In the Buddhist traditions after a year of the death, there is a ceremony to the deceased for their new incarnation held either at the home of the bereaved or at the temple. Each year Christian families to pay respect to their departed loved ones would travel the grieving journey to lay flowers and say prayers at the grave. The mourning for the Christian is mixed with hope, and joy for they sorrow over the loss, also rejoice knowing their loved one has entered heaven. Muslims have their own way of remembering their death that is filled with hope and mercy. Muslims believe that death is a departure from the life of this world, but not the end of a person’s existence. Rather, eternal life is to come, and pray for God’s mercy to be with the departed, in hopes that they may find peace and happiness in the life to come.

The third Remembrance Day also known as the Rana Wiru commemoration day in Sri Lanka marks the end to the Civil War on 18 May 2009, to remember those who perished in the thirty years of civil war that engulfed the nation. It is observed by a wider section of the population around the country and differs from the other two remembrance days in that there are two separate events marking the end of Civil War in May 2009. The first event it is a war heroes’ commemoration day under then President and the celebrations marked by a military parade, speeches and a moment of silence, known from its inception in 2010 to 2014 as Victory Day. When the first anniversary came the natural expectations were high in the country to observe the day in the traditional manner.  Unfortunately, with the end of war the rulers of the day by desecrating all memorials removed all traces of the enemy they fought. Thereafter they patronized to celebrate the victory over the faceless enemy, with much publicity.  The Victory Day was celebrated with a grand parade by the security forces in the presence of the families of the security personnel who had laid down their lives fighting in the civil war.  The civilians who lost their lives in the civil war bulk of them Tamils were remembered soberly by their subdued family members at various locations that were still under the surveillance of the security personnel who fought the thirty years of war. This sad situation persisted for six years and impacted on the mood of the people where though the war was won the rulers did nothing to win the hearts of the people who had lost their soul by the bloody war.

The wind of change brought in a new President in 2015 renamed the 18 May as Remembrance Day. The New Government has this year allowed the affected families to observe their rituals without any constraints as per their faith to pay respect to their loved ones who perished in the war. This humanitarian gesture from the rulers is a move in the right direction to win the hearts of the people, the affected people must appreciate the goodwill and be cautious not to allow any extremists in their midst to take them for a ride with their own political agenda. This caution applies equally to those who make this day of remembrance as a victory celebration for they need to appreciate those who perished are all people of the country and the root cause of the war is yet to be resolved. It is expected that the New Constitution will resolve this ethnic and other ills of the country. When the new constitution comes into effect prevailing stability in the country the whole country will join in to celebrate it as the Victory Day.