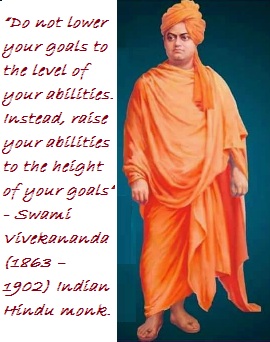 The term originated from the occasional black sheep which are born into a flock of white sheep due to a genetic process of recessive traits. Black wool was considered commercially undesirable because it could not be dyed. In the modern usage, the expression has lost some of its negative connotations; it applies well to the events currently taking place at the Northern Provincial Council (NPC) in Sri Lanka; where some ministers are under investigation, in whom due to certain characteristics or lack thereof are deemed undesirable as such should have removed from office until the investigations are brought to a conclusion and it is appropriate to remind the Chief Minister (CM) of NPC who is handling the investigation of the advice given by Swami Vivekananda, which says “Do not lower your goals to the level of your abilities. Instead raise your abilities to the height of your goals”.

After gaining independence in 1948, the central based government of Sri Lanka failed to build on the productive agriculture base of the rural folks at the periphery, this fact contributed in many ways to lose of its position as a leading nation in Asia, second only to Japan; eventually leading to many uprisings from these people. Two uprisings from the south were brutally suppressed by the state and those who survived the struggle were pardoned and rehabilitated by the state. In turn, the rehabilitated southern youth on realizing that their antagonists were stronger than them, decided on the basis if you can’t beat them, join them and joined the main stream. Today they are a force to reckon and are continuing their struggle within the parliamentary system. The third uprising originated from the rural North that spread to the East was somewhat a different struggle – a demand for self-rule. It too was made up of rural youth, but also included the urban youth affected by the riots of 1983. They got their legislators to support the cause and as the result attracted international attention for their struggle; that caused the rulers to reluctantly concede to the formation of provincial council system of rule in 1987. But the rulers were never sincere, failed to implement the full devolution package and the youth rejected it by intensifying their struggle that led to the bloody civil war that lasted three decades. Finally, with much external assistance in 2009, the state put an end to the civil war. Earlier rural people, who paid a heavy price to arrive at the provincial council system of governance and due to lack of proper implementation by the state failed to get any benefit from it. After the civil war ended the rural folks faced more hardship and sufferings, in particular those living in the war affected north and east. The misrule in fact impacted most of the total population, that resulted in more external interferences and a general election was called, that resulted in the rulers being changed in 2015. The present rulers realized early, that without steering the country out of the prevailing economic crisis it was impossible to implement a proper devolution system; proper economic growth cannot be established without good governance and for that to occur there needed a healthy political environment.

In general, people fit into one of three categories made up of self-starters, push starters and towers. This was no different in Sri Lanka and every employer aim was to bring their employees to the self-starter category and reduce the towing type to minimum, by giving appropriate training to bring them at least into the push starter category. This was an accepted practice in successful organizations, particularly in the private sectors and it was also reflected in the state sectors. However, following the 1983 riots, with the civil war engulfed the nation causing a severe brain drain, which saw much of the self-starters along with some push starters leaving the country and the culture of working class changed dramatically. Towers stayed on and more tower types were recruited to make the number in the state sectors to fill the vacuum created by the brain drain and the level of administration dropped with increase in corruption, abuse of power or misappropriation of state funds.   At the same period the composition of members in the legislature changed to the worse with increasing tower types entering the legislature under the new preferential system. This impacted the state sector further with more political interferences that resulted in governance failure; attributed to the legitimate authorities being exercised for personal or vested interests and with unofficial authorities wielding undue influences over official or administrative activities. This phenomenon was carried forward from the civil war years; into the negative peace years till change took place in 2015. With the new unity government of United National Party (UNP) and Sri Lanka Freedom Party (SLFP) as main partners with few other small parties in power the possibility was high for the country to steer out of its economic crisis that would improve the lives of the people including those people affected by the war. Tamil National Alliance (TNA) played a key role in making the change choose to stay in opposition and is one political party that was not in control of governance at the center or at provincial level. Later, when TNA took control of the first NPC, there was great expectation that they will be different and conduct the affairs without corruption, abuse of power or misappropriation of state funds. It is in this background, the present crisis at the NPC should be viewed; for it came into existence with great expectation after the civil war ended and the Northerners particularly the rural folks put in lot of effort to help TNA to gain control of NPC and they thought they had a good collection of councilors elected. After allowing a period for the council of ministers of NPC to get accustomed to their new positions, the people had expected them to perform wisely and govern the province to benefit the people, mostly debased by the civil war.

It is true, when the NPC came into operation after demerger of NE province, its path was not a bed of roses. After the present UNP, SLFP combined unity government took office in 2015, situation improved somewhat and people in the north expected NPC to perform. Though the progress was slow people were tolerant, as NPC was playing a role expected from TNA to put right many devolution related matters. But the opponents did not fail to accuse TNA of neglecting the welfare of people in the north. Unfortunately, it has now surfaced that there are some black sheep among the ministers in the NPC with allegations of corruption, abuse of power and misuse of funds. These ministers who due to certain characteristics or lack thereof are deemed undesirable are under investigation. True, mud get slung at people in power easily; but that does not mean the leadership should ignore the allegations and the investigations were in order; one of the accused has given notice to be relived from his duties until the investigations are concluded. The whole country awaits to see how NPC handle this matter, will TNA prove they are different or just the same as their southern counterparts and differ only in the language they speak. In particular, the people who voted expect that CM will rise to the occasion and raise his abilities to the height of the goals set for NPC by the people and remove black sheep if any from his cabinet of ministers, than lowering goals of NPC to the level of the abilities of the ministers. Thereafter, having cleaned their only house of power, TNA should work with the government jointly both at provincial and in the legislature to fast track the new constitution for the people to vote at a referendum giving their acceptance and that will open the doors for all other issues to get resolved one by one, to lift the nation out of the present garbage stage it has trapped itself due to the recklessness of the past rulers.