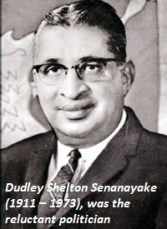 Dudley Senanayake, was the reluctant politician, one wonders whether the intrinsic love and affection he showed for his countrymen throughout his public life was the hidden force that persuaded him to enter politics. Dudley is a good example to follow for the present day politicians, who remain in power through violence and crime ignoring any loss of lives or when accused of aiding and abetting corrupt practices; During the golden era of the country, an event happened in July 1953, with Dudley as the Prime Minister, a Hartal took place to protest against the rice subsidy, a legacy of World War II. Crowds went on rampage creating trouble in four provinces that compelled the Premier to sign ‘shoot at sight with impunity’ order to control it; with those powers the Police brought the troubles under control within days, but a civilian died in the shootout. The death of a civilian tormented a very sensitive Dudley, who took full responsibility for the tragedy; immediately resigned on his own accord from Premiership and party leadership; the first and last time such chivalry was witnessed in the country.

Sri Lanka was always and still is a multi-religious and multi-ethnic country; yet in 1972 the Republican Constitution was introduced that favoured the Sinhala Buddhist community, with both their language and religion given preference over the rest. Since then with a highly exaggerated religious rituals in place and over simplified perceptions with a general disinterest in learning any of the actual teachings of Lord Buddha, the country depreciated economically and with it all communities disintegrated into smaller political groups. All due to failure on the part of the rulers lacking of right thought to take right action; that resulted in three uprisings against the state, by economically disadvantaged minorities living in rural areas that helped rule of the jungle to spread and prevail in the country. Another factor that ruined the economy of the country was the rapid increase in the act of offering of a bribe given or solicited to influence people in a position of responsibility, the corrupt official described as `bribe eater’ to act contrary to their duty; a flourishing act that has broken all barriers in the country. Thus Sri Lanka scored very poorly on Transparency International’s 2008 Corruption Perception Index, was placed at 92nd position out of 180 countries. The giving or receiving of bribes often means breaking the second and the fourth Precepts and always involves cheating, greed, law-breaking and injustice; this was rampant in the country before changing the last rulers.

In 2015, to save the nation from this calamity the New Coalition Government was chosen as the political instrument of the social movement named Yahapalanaya, formed to change the direction taken by the previous government by many socially conscious intellectuals and others led by a true Buddhist monk Late Maduluwawe Sobita; by establishment of democratic norms like freedom, accountability, transparency and rule with law and order on a sustainable development path with the aim of taking the country forward. It was formed with the coalition of the two major political parties and few minority parties, it was never the property of any one of those parties. Yet, there was a small group of senior legislators, who dominated the cabinet like inner circle men and the rest were ordinary players who made up the number. It soon surfaced very early in the life of the government, that there were some black sheep in  government involved in many non-ethical activities, one such activity was the now famous ‘Bond Scandal’. At first the government played it down, but nobody believed it and the opponents of the government did not give up; pursued with the matter and more information were brought to light. The embarrassed government, reacted by appointing a commission to inquire into the Bond Scandal; who have to date called many in authority and otherwise to clarify matters and the investigations are still progressing. The latest was the call made to one of the key minister in the new government to clarify matters related to transactions found by the investigators; that may lead to very serious charges of corruption against the minister. Though there are commissions and courts, who will decide on that, on ethical grounds the minister has acted most inappropriately and has lost all credibility to remain in the government. Earlier on many occasions the leaders of the day, having been responsible for many corruption related activities that has resulted in civilians being killed. But never did any of the leaders resign from their position, as it did happen in 1953; nor did they regret for such occurrences. In the latest was where the leader, who after winning the civil war in 2009 led a government for six negative peace years was accused of many non-ethical activities. But without a shade of gilt, the leader carried on regardless and in 2015 the people voted him and his government out of power. Yet they are now sitting in the opposition benches in parliament, waiting for an opportunity to topple the elected government by any means to regain power. It is in this backdrop, a minister in the present government, who were elected for the very purpose to put an end, has discomforted the rulers by getting involved in non-ethical activities that could only eventually result in them getting voted out of power.

As anything is possible in this lost paradise and because nobody is indispensable in this world; from the point of view of the people; in a country where over 75 per cent of the people mostly living in remote corners of the country are poor and struggling; if the government fails to achieve its objectives, the greed of the minister for luxury living becomes questionable; will not take this well and certainly would boot out the government with the black sheep minister; all would fall by the wayside and the yahapalanaya movement will opt for another political instrument. Therefore, government faces a crisis of credibility as never before, from which it must come out if it is to go forward and keeping the minister would seriously tarnish the government. Under these circumstances in the interest of the Yahapalanaya programme, the minister should resign, failing which the Prime Minister should release the minister from his duties, until the investigations are completed.