“Panem et Circensus”, literally “bread and circuses”, was the formula for the well-being of the 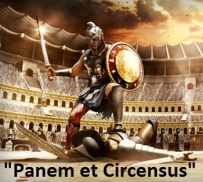 population, and thus a political strategy; a mechanism of influential power over the Roman mass; an efficient instrument in the hands of the Emperors to keep the population peaceful, and at the same time giving them the opportunity to voice themselves in these places of performance. Give the people something to eat and provide circuses to entertain them and you could do anything, the people will not care; this formula offered a variety of pleasures such as the distribution of food, public baths, gladiators, exotic animals, chariot races, sports competition and theater representation. A similar strategy of “bread and circuses”, is practiced frequently in Sri Lanka, as an efficient instrument by the previous regime now in opposition to voice their views outside the legislature to keep the population agitated against the unity government; in return gave them anti-democratic favors, that includes a free bus ride from rural areas for a day with something to eat and drink at their places of performance in the city and by those in wilderness in the provinces.

In Sri Lanka, always the view of the public was totally disregarded by the rulers, who brainwashed the people to think only the so-called ‘leaders ‘have the brains and the vision’. But in the 50s failed to realize the need to keep export earnings high to meet the cost of welfare provided to the people. In the 60s, the economy of the country saw successive governments promoting green revolution aided by bureaucrats; the only winners of this change were those who sold fertilizers, agrochemicals and the politicians and bureaucrats who received kickbacks from this lucrative trade. In the late 70s the country began to shift away from a socialist orientation, the government commenced deregulating, privatizing, and opening the economy to international competition. The net result of it all was the country got divided economically, with 20% of the population living mainly in urban areas getting richer with control of 80% of the country’s wealth and the remaining 80% of the population left in the rural areas with 20% of the wealth to share among them.

True the rulers were pre occupied with the Tsunami and many other natural disasters in addition to number of insurrections and the civil war. With cost of civil war ever increasing by the turn of the century country in 2001, recorded the first contraction since independence; reached an all-time low a negative GDP growth rate and faced bankruptcy. The crisis was averted by a hasty ceasefire agreement to put the civil war on hold and brokered substantial foreign loans. The government concentrated on mass production of goods for domestic consumption such as rice, grain and other agricultural products, still using the green revolution methods. A series of global and domestic economic problems and affected by the twenty five years of civil war slowed economic growth, diversification and liberalization; exposing the fundamental policy failures and structural imbalances in the economy and the need for reforms. During the short lived peace process Sri Lanka was able to reduce defense expenditures and begin to focus on getting its large, public sector debt under control; economy experienced a gradual recovery, benefited from lower interest rates, a recovery in domestic demand, increased tourist arrivals, a revival of the stock exchange, and increased foreign direct investment (FDI), aided by strong service sector growth and the agricultural sector staged a partial recovery.

Once Paradise Island was unlucky again, failing to make ceasefire into a permanent harmony when the previous regime took power of ruling the country in 2004; result that surprised most of the population and civil war resumed in 2005 led to a steep increase defense expenditures. The increased violence and lawlessness also prompted some donor countries to cut back on aid to the country. A sharp rise in world petroleum prices combined with economic fallout from the civil war led to inflation that peaked 20%. During this time the war intensified and the government with the intervention of many countries silenced the guns in 2009 ending the civil war at a heavy cost of thousands of human life. Yet, the GSP plus preferential tariffs was revoked due to alleged human rights violations, which cost the country about USD 500 million a year. However, with the civil war over the economy started to grow at a higher rate of 8.0% in the year 2010 and reached 9.1% in 2012 mostly due to the boom in non-tradable sectors. However the boom didn’t last and the GDP growth for 2013 fell to 3.4% in 2013 and only slightly recovered to 4.5% in 2014. The government halted the privatization process and launched several new companies as well as re-nationalizing previous state owned enterprises. Some state-owned corporations became overstaffed and less efficient, making huge losses with series of frauds being uncovered in them and nepotism rising. The regime that came to power made a surprise exit in 2015 leaving many issues unresolved; as they were voted out by the population, prompted heavily by many civil societies following the intervention of many nations.

In 2016, the unity government formed with the two leading political parties with few other minority parties. The new unity government has begun sorting out the many issues left behind by the previous regime; succeeded in lifting an EU ban on fish products which resulted in fish exports to EU rising by 200% and in 2017 improving human rights conditions resulted in the European Commission restoring the GSP plus facility to Sri Lanka. The new government is fighting on many fronts to put the country on the right path to restore long lost democratic rule.

With the ‘Green Revolution’ still in full swing the land begun to fail and the ground water got polluted by the new intensified food production methods; today, the nation is paying heavy price for that green revolution, last year the fertilizer subsidy alone was over 50 billion rupees with no assessments made on the cost of land failing or water pollution. Already this green revolution has dragged many millions of rural people into poverty and has dangerously weakening food, water and energy security for the future. Today, while the rural farmers are totally dependent on the ‘Green Revolution’ approach burning more fossil fuel than ever before to increase the GDP and the government is planning for massive constructions that require huge amounts of expensive concrete and massive amounts of fossil fuel for its up keep. Today, all the abuse on the land get pass off into the ocean around the island nation; is ringed with heavy pollution, much more than India, Africa or South America.

Past two years investigations indicate that those in power want to develop the country with borrowed money to made money themselves; it was this greed that caused the change of government in 2015. Now people who have brains and the vision, must stress to the opponents of the center and provincial governments with “Panem et Circensus” strategy agitating the people to go against the rulers, will only end to keep them in the wilderness forever. Instead, they be advised to place a high value on the health of their people; help with their legislators each provincial council to devise a ‘bottom-up’ plan to suit the province to get the country out of the ‘Green Revolution’ trap, by controlling the cavalier use of toxins and by introducing modern technics in the food production.