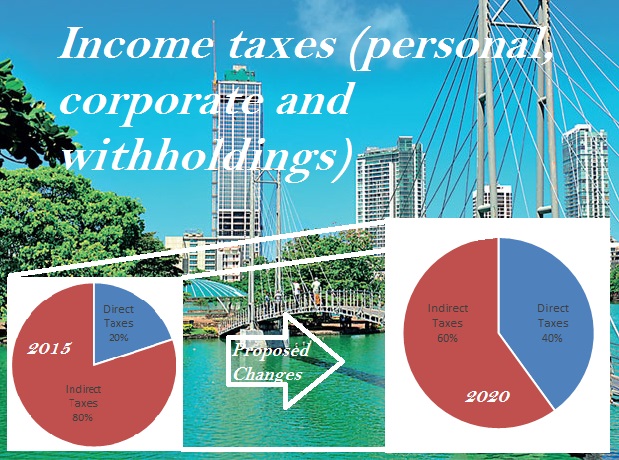 In Sri Lanka, the direct tax system is very low when compared to many countries in the region; in a country where 20% of the population are rich, who live mainly in urban areas, find loop holes in the tax system to accumulate wealth benefit from 80% of nation’s earnings; while the balance 80% poor living mainly in rural areas share the benefits of the balance 20% of the earnings. The present tax system takes more indirect tax than direct tax at the ratio of 80:20, which impacts more on the poor than the rich; yet it fails to bring the necessary revenue for the government. To make matters worse, there is a very large welfare system that syphon out revenue faster than it gets collected by an inefficient revenue collection system. Successive governments have avoided making changes to it, for fear of losing votes at elections. The unity government with the Inland Revenue Bill in Parliament proposes to make changes that would lower the indirect to direct tax ratio to 60:40 per cent in the coming years.

Today, the taxation system of the country is at a critical juncture, because over time both the tax revenue and non-tax revenue to the government have been decreasing, while overall Gross Domestic Product (GDP) as well as per capita income have been steadily increasing; today there is a necessity to reverse this trend if the country is to come out of the economic bottom ranking in Asia. Sri Lanka now has one of the lowest tax revenue-to-GDP ratios in the world, and it has been declining for decades. Indirect taxes account for 80 percent of Sri Lanka’s tax revenue; made up mostly VAT, excise and customs revenue; limits the country’s capabilities to expand the tax base and raises issues regarding the equity of the system and how the tax burden is distributed among social groups. Tax evasion is another big problem in the country with professionals like doctors, lawyers, accountants who do not disclose their true income and pay less taxes or completely evade paying taxes, successive governments implementing tax amnesties have also led to tax avoidance, under-invoicing of imports is also an evasion of paying correct taxes, over-stating of expenses and transfer pricing, and illegal flows of imports to the country has contributed to heavy losses and these areas have been closely examined to strengthen the revenue flows to the government. There are about 25 taxes in operation in the Sri Lankan economic system. This large number of taxes compared to other developing countries has made the tax system very complicated. Many developing countries with 8 to 10 taxes in the system, have managed to collect a larger per cent of revenue per GDP, than Sri Lanka. In Malaysia, 70% of the tax come in the form of Income Tax, while India collects 50% of its tax via Income Tax. The Sri Lankan economy generated income taxes (personal, corporate and withholdings) amounting to 2.4% of GDP on average per year in the past five years, whereas in much of the Asia-Pacific region, this figure was close to 5.4% of GDP. In this context, recent Economic Policy Statement (EPS) did set the target of achieving a 40:60 ratio of direct to indirect taxes by 2020 recommended by the 2010 Presidential Taxation Commission and as reiterated in the 2017 Budget speech and Inland Revenue Bill proposed is expected to do that. But already there is objection to say that it will affect the professionals. Apart from national taxes, provincial and local taxation is also a significant part of the Sri Lankan tax system; Further decentralization of taxation to the provinces came into operation after the 13th Amendment to the Constitution in 1987, turnover tax at the wholesale and retail levels was devolved to the PCs. Turnover tax is the highest revenue earner to PCs accounting for 44% of revenue. This is followed by stamp duty at 28%, licensing fees from motor vehicles and excise at 13%, and others at 15%. The tax sources devolved to the PCs account for only 4% of the central government revenue (0.6% of GDP); from a revenue point of view, the Provincial taxation is unsatisfactory, while the Provincial expenditure is around 11% of government revenue and the deficit is met by grants from the Centre. In comparison, province/state revenue is above 50% of central government revenue in India and Australia, and above 15% in Malaysia and Thailand. Apart from limited fiscal decentralization, the provinces lack adequate tax administration capacity and specialized technical skills that the Inland Revenue Department enjoys. There is a lack of motivation among PC revenue collectors in seeking new and innovative sources of revenue; partly due to the dependence on an annual grant received from the Centre which always ensures PCs that recurrent expenditure needs will be met. The Local government revenue may also undergo change with the proposed Grama Rajjaya Concept involving the creation of 2500 new units at grassroots level.

Since the sixties the government has been granting eleven tax amnesties, but have not produced the expected results and been largely failures. The existence of a large informal economy resulting in large-scale tax evasion and avoidance as well as black money all of which have eroded and narrowed the tax base with the total number of taxpayers being about 3% of the population. In 1979 public servants were exempted from taxation because the government could not afford to grant a salary increase to public servants in line with the private sector; ever since then, this has become a rigid policy of the government that resulted in over a million labour force in the public sector do not pay taxes and Sri Lanka may be the only developing country in the world where public servants do not pay taxes; further  BOI tax exemptions and tax holidays have led to approximately 1% of GDP revenue losses per annum, and various exemptions on VAT and import duty from time to time have also contributed to eroding the revenue. Following the end of the civil war in 2009, the inequality was at its historical high and the development challenge is to ensure that rapid economic growth is achieved with better equitable income distribution. A complicated tax system, weaknesses in tax administration and its mechanism is another contributing factor where changes are needed. With significantly high fiscal deficit the taxation is crucial in generating government revenue; efficiency and productivity of VAT has to be improved while taking measures to ensure equity. Successive governments have heavily depended on indirect taxes for tax revenue instead of working out a reasonable balance between indirect and direct taxation; The direct taxes comprise on average less than 20% of tax revenue while indirect taxes comprise over 80%; thus the bulk of the taxation has fallen on the less well-off people and therefore the tax system is not delivering the potential revenue. With the indirect tax revenue on the decline, there is an urgent need to enhancement it and a better balance would be 60:40 say the experts. The contribution from direct taxes to total tax revenue is low largely because the tax base has remained narrow; has not broadened in line with the increase in income or economic activities. Almost 90% of revenue comes from taxes (10% is accounted by non-tax sources). The weak tax revenue over the years has led successive governments to impose ad hoc taxes from time to time. Further, the constant changes in the rate structure, the multiplicity of rates, the recent rate concessions for “professionals,” and the recent proposals to change the basis of the corporate rate structure have tended to further complicate the system. One of the important elements in securing a satisfactory level of tax revenue is the base and coverage of the taxes. While certain steps to broaden the tax base and coverage have been taken (for example, the inclusion of public servants hitherto exempt from income tax, widening the base of the VAT and NBT by adding the wholesale and retail sectors among others), the base and coverage still need to be enlarged, including re-examination of the tax free allowances and the enhanced allowable expenses.

The Inland Revenue Bill (IRB) is expected to provide a simpler and more transparent tax policy that aims to reduce the indirect tax burden on the poor people, while introducing reasonable direct taxation on considerable income earners. The present tax free allowance is to be increased from Rs.50, 000.00 to Rs.100, 000.00 and everyone over the age of 18 years of age given a PIN number regardless of whether they had to pay tax or not. These proposals will be welcomed by the low income earners and the poor, while high income earners paying less or no tax, may take a while to accept and for the same reason the Unity Government before getting the bill passed may face lot of opposition in the legislature and outside. There is still a long way to go with these proposals and more measures needed to improve revenue administration in the country; therefore the Tax reform is a must for Sri Lanka today!