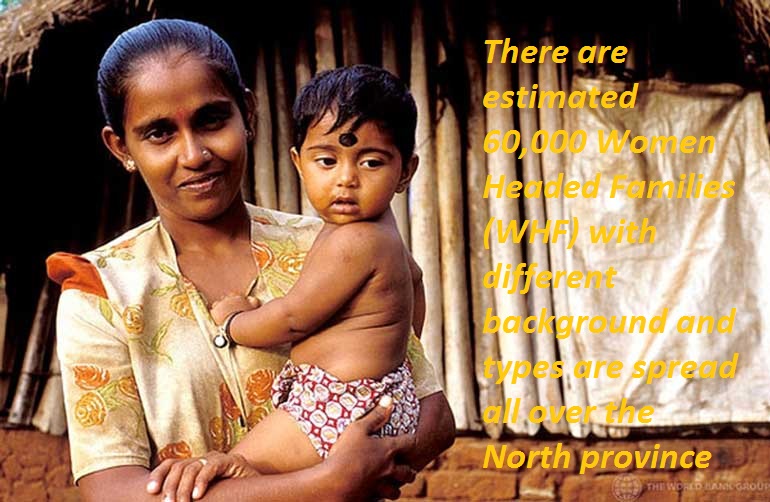 Eight years have rolled on since the civil war ended in 2009 and with the government progressing at snail phase with its reconciliation programme; affected people are subjected to mounting many crimes and social problems are struggling to rebuild their lives, in particular those living in the war-torn north. While most of these crimes and social problems were committed by local young adults getting addicted to drugs and alcohol with easy money received from next of kin; security forces men too have exploited the situation to their advantage. All helped to increase the number of rapes as witnessed in many countries after a period of war in the six negative peace years from 2009 to 2015 across the province; there were men from other provinces working mainly in the towns in the north, abusing women practicing the oldest profession known to mankind. Though such degrading sexual practices were taboo, shirked by the society and was unheard during LTTE rule, got worse after the war ended in 2009, and not surprisingly unwanted pregnancies are on the increase and is an issue in the north and the women widowed by the war in their 20’s were vulnerable to these sexual violence. NPC should make a master plan to uplift the lives of these trampled and most needy people in the province.

The very hardworking, disciplined and reserved Northerners were cut off from the rest of the country economically and socially by the 30-40 years of bloody civil-war and generations that grew in that very restricted climate are now unable to handle the new situation. For during the war years, in the north in particular the Liberation Tigers of Tamil Eelam (LTTE) ruled with an iron fist and any one committing crimes were punished promptly, law and order was absolute. At worst offenders were shot and killed and bodies were tied to light posts in the middle of the town for public view as a warning, while minor offenders like petty pilfers were put in prisons and made to do tasks like sweeping streets and cleaning public places. In such circumstances life was safe for women and children to walk on the roads alone at night as none took the risk of harming them, people left their houses unlocked and nothing would be stolen. Thus people in north lived without the national police force for 30 to 40 years. Suddenly, after the war many things came in abundance and people particularly the youth didn’t know how to handle the situation. Whereas before people only bought the necessities, they were now able buy many other items for example drugs or even the smart phone; all contributed to increased sexual violence and crimes among teenagers. Societal structures had also broken down as many family members went abroad during the troubles and many people lost land and got displaced. With the familiar safety of villages filled with known people and families a thing of the past.

Drugs are coming into the region mainly smuggled in by the sea from overseas and it is widely known that people involved includes all sections of the communities, trades and sectors each for their own financial gains. Drug dealers are openly selling them, distributed drugs are sold everywhere that includes the school going teenagers in both urban areas and at the village level creating huge issues for the community. The increased usage of drugs has considerably increased the number of crimes committed by drug users, typical pattern is to beat up elderly people in public places during the day and steal from them to meet the cost of drugs to severe crimes mostly in the nights involving rape and murder under the influence of drugs. Families seldom seek help for members affected by these issues and there is severe shortage of places offering rehabilitation services for drug and alcohol services. There is a need for more drug and alcohol rehabilitation services.

The police stations that were reinstalled after the war, were initially manned by Sinhala police men transferred from south as such they were not speaking the local language Tamil; this alongside the natural weariness of the army and other law enforcers due to their actions during the war, are reluctant to use and people kept away from seeking help from the police. Similarly, these Sinhala police avoided venturing on walk the beat duties; all facilitated resumption of petty crime, theft, abuse, etc. and over time grew out of control throughout the region. Concurrently saw domestic violence spiral upwards, caused mainly by men intoxicated by drugs that was available easily in the market; many of whom being unemployed or not earning enough money; women largely tolerated this type of violence for the sake of their children; because they were financially dependent on the husband and for fear of losing the respect of the community as it was a cultural issue; rarely reported these cases to the police. In what is still a male dominant society, such issues are difficult to deal with and with the present tolerance culture largely prevalent in the region. Though the government is attempting to address this issue, will not succeed without corporation from the communities living there and it is best done with proper guidance from the Northern Provincial Council (NPC).

The main target or people most affected are the Women Headed Families (WHF), the largest community impacted by the civil war of three decades followed by eight peace years. These WHF are headed by wives of men killed during the war, estimated around 69,000 in the Northern Province of which 34,000 are from Jaffna district, such as unmarried women with children, divorced women with children, alcoholic fathers who don’t contribute to the family, unemployed husband’s etc. Many of these women do hard labour to support their families, while their children are sent to work from an early age to support the family. These families endure a lot of hardships and are vulnerable to the said crimes and have little or no help at present from the government to address these issues, apart from few Non-Governmental Organisations (NGOs) offering counselling, but not available in remote villages. True these NGOs offer extensive services from marriage counselling, counselling for family problems to abuse, child abuse, domestic violence, and similar related problems given that a lot of people suffer from war related mental health issues such as depression and other related stresses they endured during the war, which affect all aspects of their lives and their children’s lives. Therefore, both women and school children need sexual education, but is not taught properly at schools as there are not enough resources.

All estimated 60,000 Women Headed Families (WHF) with different background and types are spread all over the province, it is necessary to empower these women. But that is not an easy task for anybody for on the one side most of them are facing as a routine domestic violence and in the outside environment much sexual abuse and more violence. The government has not put in enough efforts or allocated necessary funds to meet their needs.  On the other side the police force operating in the region is unable to curb the domestic violence and sexual violence unleased on these women; as these police personnel have no or little knowledge of Tamil, means many cases go unreported or even if a case is reported the process is long and drawn out and probably largely ineffective. crimes are not investigated or followed up for there are times the policeman on duty just tell people to come back later because they have no translators and with few female police are overloaded with domestic violence and sexual violence cases. The police did conduct a recruitment drive, very few Tamils with fears for their safety mindset due to the war and ethnic tensions living in an army controlled province came forward to join the police. Sadly, the Northern Provincial Council (NPC) should have ventured to help the cause, at least after 2015 under the unity government. After all the war was fought to get more power devolved to the periphery and now with NPC in the middle of it all should put the powers already with them to test by attempting to resolve the issues of these families. It would serve as an entry point for NPC to make a master plan to protect and help to uplift the lives of all needy people in the province and at the same time increase the cost benefit on underperforming projects utilizing funds received from well-wishers living overseas.