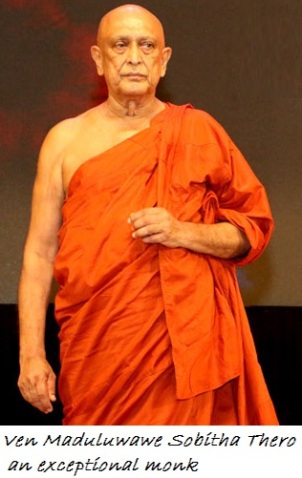 This week many Sri Lankans commemorated Venerable Maduluwawe Sobitha Thero, the influential Sinhalese Buddhist monk respected by all communities in the island, as a true nonviolent revolutionary, who passed away two years ago on 6 November 2015. True there are many meditating monks in many forests or forest like reserves in the country, following all the Vinya rules given by a mendicant 2500 years ago. These monks rarely interact with humans and then there are many more good monks who interact with people in remote villages, who stick to Dhamma, stay out of politics and without seeking publicity.

Ven Maduluwawe Sobitha Thero was an exceptional monk, who promoted mutual respect and amity between the various religious and linguistic groups in the country at a time, when the State had failed to protect Buddhism from the many bad monks who for giving a poor image of Buddhist monks to outside world received much publicity in the media. But perhaps that was not surprising for successive governments for several decades, knowingly misused them for their political gains; that drove a united rich paradise into a divided poor nation. For more reading on this true Buddhist monk of respect, visit previous postings titled “Remembering a true Buddhist Monk” on Northern Breeze @https://rtr734.wordpress.com/2016/06/28/remembering-a-true-buddhist-monk and “Ven Sobitha Thera – respected by all” on Northern Breeze @https://rtr734.wordpress.com/2016/11/07/ven-sobitha-thera-respected-by-all

Today, many Sri Lankans fondly remembers Ven Sobitha Thero, as a prominent socialist and social justice activist who played a key role in leading campaigns to bring the present unity government to power in 2015. The Ven Sobitha Thera is missed by many, who in his lifetime saw the guardians of the country were rotten to core and called for quick decisions to differentiate between the rouges and the good ones to take the country out of darkness; had the Thera lived today, he would have perhaps had a mixed feelings appreciating the difficulties faced by the unity government and been surprised of all the events that are being rolled out by the opponents with the aim to derail the government.