In Sri Lanka, today the President and Prime Minister are facing numerous longstanding complex problems; to overcome these multiple challenges must first disengage activities of the enemy within the past two years, who made many attempts exposing the elected government logic to overturn government policies. This enemy within did attempt to dull the vision of the government to put the economy back on track and derail  the constitution making process and other reforms that were intended to resolve many national issues including long standing ethnic problem. Already having seen the tax reform efforts of the Unity Government denting their benefits, they were determined to prevent the rulers reaching their goal before the 2020 General Elections. For if these problems are resolved, the government will put more efforts to eat away the black money earnings of the enemy within have enjoyed for over 40 years from the heavily liberalised free market economies; while the rulers without resolving problems caused by their changes to the original constitution, were pre occupied attempting to silence the guns of their own oppressed minorities. 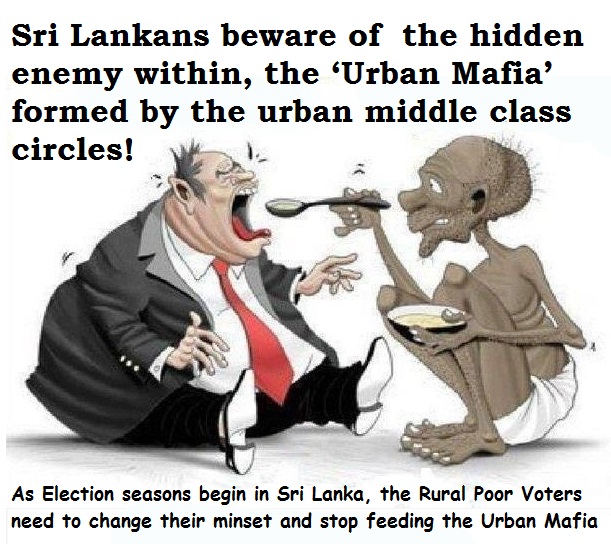 The urban middle class circles formed the hidden enemy within, as ‘Urban Mafia’ that partnered the extremely corrupt system within the free market economy; having created niches to making big money are today not willing to change anything and lacks in the rebellious social activism, in spite of them having access to information, new knowledge, intellectual trends and discourses, a culture of socialising and good exposure to what happens in the world outside. They were not willing to let any democracy function in the country, because over the past four decades, they got access to lot of tax free black money from many sources and have utilized a very small portion of these funds to assist candidates of many political parties to get voted to power; in addition the enemy within has managed to get their own representatives to enter the legislature through the back door misusing the national list facilities of large political parties. Thus the elected representatives are today influenced to manipulate the affairs of the country from the legislature to serve the interest of their pay masters and not that of the communities they were elected to serve. Thus all democratic structures and systems including elections have been turned into mere procedures with no utility and delivery.

Way back before the country gained independence in 1948, Sri Lankan Left politics began with several leftist parties formed during the period of political experimentation from 1931 to 1948 in British colonial Ceylon. Then it was the respected urban middle class professional circles and the academia empowered these leftist political parties with non-communal membership to its working-class activism, especially trade unionism. The oldest of all existing political parties the Lanka Sama Samaja Party (LSSP) formed in 1935 was the main opposition party after the general elections of 1936 and the second largest party in Parliament after the general elections of 1947, 1956 and 1970. In spite of attempts made by the United National Party (UNP) to reduce the vote bank of the Left movement, with opinion making as its strength and by questioning the existing order, they percolated into other social segments, such as organised labour and to the petty farmer; thus represented the numerically small urban working class and the larger rural working class concentrated in the plantations and mines. As the far right majority community rulers failed to share power with minorities including the leftist parties, who latter did participate in the government and the first republican constitution was drafted in 1972 by a LSSP minister. Thus the Left movement grew into a formidable political force by early 1960s forming the backbone of the country and though LSSP did play a role far larger than its electoral success would suggest. But with successive governments pushing ahead on heavily liberalised free market economies for over past 40 years and the urban middle class circles formed the hidden enemy within that partnered the extremely corrupt system within the free market economy and in more recent years, has sadly made LSSP a politically spent force.

Thus after seven decades of self-rule, Sri Lanka still remains a developing country and the plight of the voiceless majority in the country made up of the working lower class, those disabled by war and other natural disasters, elders without care and the many thousand families without regular income who are without proper representation in parliament. Though they all have members representing the district they live in, but are isolated in the villages as such are not served well; only when a disaster occurs in their life gets covered in the media to get debated in parliament and if they are lucky may get redress. Though they are in majority got only a minority share of the country’s wealth through various social welfare system to sustain their life; while the middle working class and the rich minority received through devious means the majority share tax exempted of course; it is this imbalance that were the root cause of two southern uprisings led by JVP and these root causes with ethnic discrimination caused the civil-war following a youth uprisings led by LTTE that originated in North then soon got stretched to East and finally engulfed the whole country for over three decades melted out miseries to the population living in those rural areas. Most impacted were the people in the North and East war zone, whose youth fought a conventional battle with the state armed tri-forces manned by youth from the rest of the country, they killed each other, grew to become disabled or disillusioned elders that defeats any logic. All uprisings impacted the poor majority in the absence of good governance and the war brought to finish with international involvement in 2009. That followed by six negative peace years with many physical infrastructure development projects, while much needed social infrastructure never got off the ground. The strength of security forces were retained in the war torn regions after 2009 without delisting to reduce the tri-forces; causing more miseries to the voiceless minority population in the North and East war zone; it must be noted in the same period many thousands disillusioned tri-forces personnel vacated their camps in disgust, turned deserters were hunted by the state. It is very clear that the system of governance is at fault as the legislators were not able to solve the problems of these voiceless people divided culturally and spread round the country; while the legislators fell prey to and were exploited by the ‘Urban Mafia’ – a very selfish, morally declined and socially alienated urban middle class made up of academics, business barons and all other professionals from accounting, engineering, legal, medical and other consulting disciplines including the hierarchy of the state bureaucracy to its own benefit.

It was in this setting, the cry from the social activists to punish the corrupt in the previous regime, received international attention to support a change, resulting in the formation of Unity Government in 2015, yet the enemy within continued with their same corrupt practices to influence the affairs of the government during the last two years. While the only left JVP in opposition played a major roll to re-establish good governance and for this reason alone the enemy within socially alienated them; thus JVP remained where it began as the militant political representation of the vernacular rural, lower middle-class. With the determination of the enemy within to keep the present system going without changes till the next election due in 2020, makes the appeal made by India and the Western Nations to honour the promise of good governance remains irrelevant. While the TNA’s appeal to have a better power sharing arrangement through a new Constitution remain a dream; a point not well appreciated by the militant political opponents in North and East provinces, who are misguided by those who fled to many countries overseas and now dreaming of by gone past era are hell bent to manipulate the situation to make their political dream come true are only driving further the wedge that divide people in North from those in the South.

Time is ripe for the civil society to induce all political parties to support the Unity Government to continue its battle to change the system of governance and educate their communities regarding the pitfalls and the cons in the existing corrupt system of governance; while TNA has to go the extra distance to win over their misguided opponents in the North to mold them into their alliance, before the next general election due in 2020 with a single voice; as to who form the government shall be taken by the voters and not the corrupt that includes the urban mafia, to provide the much needed good governance with the majority community inviting all other communities to share the country.