Sri Lanka has plunged into a constitutional crisis, with the media announcement that President had removed the current Prime Minister from his office and sworn in former President as the new Prime Minister and with current primer has refused to accept this change saying the action was unconstitutional. This is nothing new for there has been many unconstitutional acts from previous rulers that commenced seven decades ago, with no signs of communal politics subsiding at all in Sri Lanka, in spite of the majority community dominated rulers receiving a well drafted constitution with checks and balances fit for the multi-ethnic and multi-religious country. While this constitution collected dust, the rulers kept the communities divided for many decades, by making their language as the state language as if the country belonged only to them and even went further to bringing religion into politics with a republican constitution giving prominence to their religion that preached moral behaviour and virtuous conducts.  Regrettably, it was the lack of this morality and lack of respect to minorities in the land from a central administration driven by a culture based majority power; that gave rise to the struggle from the minorities calling for separation of powers, caused a civil-war that physically divided the nation for three decades. As they say anything is possible in politics and the possibility existed for the Unity Government to end its term prematurely from the time peoples verdict was received at the Local Government polls held early in the year and this action of president amounts to putting the cart is before the horse has plunged Sri Lanka into a constitutional crisis! 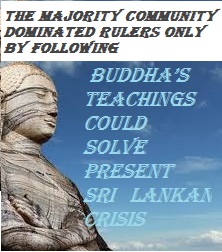 Earlier to bond broken nation back the rulers did amend the harsh republican constitution to make all three languages in use as state languages and the provincial council system was introduced to devolve powers to the peripheries and with assistance of friendly foreign governments brought the civil-war to finish in 2009. However, leaders from the majority community bragged on about winning the civil-war of three decades; yet failed miserably to put back the economy clock forward that lagged by five decades and gave negative peace for six years has prevented the country from bonding back as one nation. Whereas people had expected the ruler to use the opportunity to take the country forward by putting right the wrongs caused by the civil-war to the minorities, who were denied real peace even after the civil-war ended six years ago. Then regime changed in 2015 without resolving any of the post war issues of the minorities in the previous war zone, who were left high and dry as the Unity Government took office. Hopes were thus raised high in 2015 that the Unity Government would bring about changes to a politically divided corrupt and debt harassed country with assistance from foreign governments. But within month of coming to power came the Central Bank Bond scam to shake the very foundation of the Unity Government from which it never recovered and due to lack of full implementation of the promised new constitution and several other measures failed to perfect the grievances of the affected minority communities. In spite of making some progress to strengthen parliamentary democracy with an amendment to the constitution, reducing the executive power of the president, improving independence of the judiciary and media freedom the general fear of being abducted or killed is absent. Yet the efforts to protect human rights and achieve economic prosperity was slow coming, whereas the government could have progressed more with the promised reconciliation process. Sad fact is that the government has not made the desired progress in addressing bitter legacy issues of the civil war that was brought to finish in 2009.

Further there have been claims of unwarranted meddling in investigations by powerful politicians as the suspects are mostly from administrators and security forces. The new Counter Terrorism Act, to replace the Prevention of Terrorism Act and the establishment of an office for dealing with the payment of reparations was recently approved by parliament is yet to become law. The Office of Missing Persons has begun consultations and institutional capacity building to fulfil its mandate to investigate tens of thousands of civil war related disappearances, all are progressive moves; but there are still much to be done with undue delay in matters pertaining to the promised Truth, Justice and Reconciliation Commission and the call for a genuine power-sharing arrangement in the north and east of the county through a new constitution for a united Sri Lanka. Following consultations in the parliament, an interim report by the steering committee of the Constitutional Assembly was published and debated, but so far, no final draft has been produced and the government’s reform agenda has been stalled.

In this backdrop comes the news that the President has taken everyone by surprise and sworn in former President as the new Prime Minister that has plunged Sri Lanka into a constitutional crisis, because the 19 Amendment clearly state that the President no longer has the power to remove the Prime Minister at his discretion. [S. 9 of the 19th Amendment Act , Article 46(2) of the Constitution] and could do so only if: 1) The Cabinet of Ministers is dismissed, 2) The PM resigns, 3) The PM ceases to be a Member of Parliament [See Article 46 (2) of the Constitution] The Cabinet of Ministers can only be dismissed if: 1) If the PM ceases to hold office by death, resignation or otherwise, 2) If Parliament rejects the Statement of Government Policy or the Budget, 3) Parliament passes a vote of no-confidence in the Government [Article 48]. Though the Central Bank Bond Scam did make the Unity Government to lose its face to some extent, the present action to remove the Prime Minister by the President is certainly unconstitutional. So it is a waiting game to see how this crisis get resolved, it could only be done in the parliament by the representatives of the people to enable normalcy to return at the legislature and it therefore is up to the parliament to confirm if the term of Unity Government ends or not.

The present forced change by the president is unconstitutional, opportunity should not be lost to empower the legislators to resolve it in a peaceful manner. The general acceptance among free thinkers is fault lies due to corrupt legislature and the poor administration at the center and only option wash to first weed out these dishonest common men turned politicians regardless of which political party they belong at the next General Election in 2020 and then to vote many new law makers for any political party of their choice to govern the country to get the country out of its present mess. Perhaps more prudent thereafter to resolve devolution issues to provide a self-governing arrangement for all nine provinces to preserve the diversity of the small island that is multi-ethnic and multi-religious nation to keep the country bonded and proceed the march forward as a united nation.